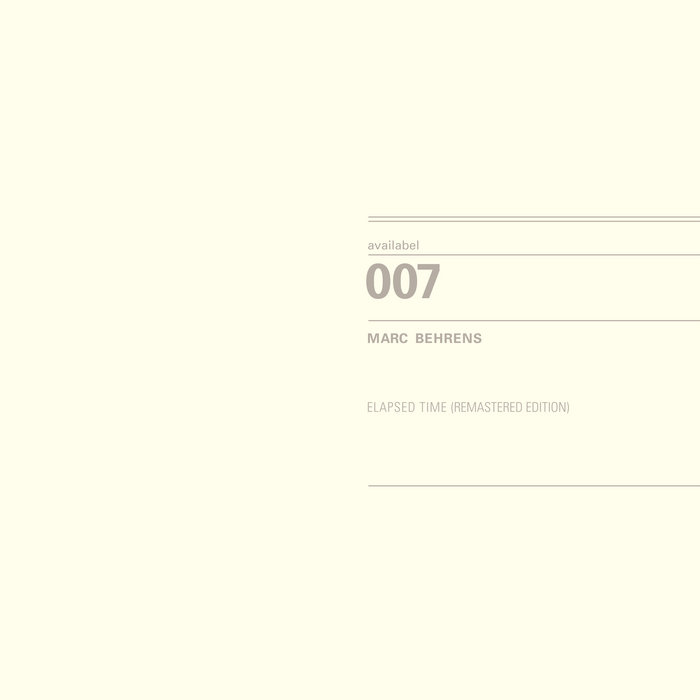 “Elapsed Time” is inspired by the book “The Secret War”, by Brian Johnson (British Broadcasting Corporation, 1978). The sounds and sequences used in the piece were recorded exactly fifty years after the events the book investigates, namely the technological war between Germany and England between 1939 and 1945. I found the book by chance in a sales corner of a department store shortly after I had started the composition. Only while reading the book in the breaks that I made during the actual work I realised that I could make a connection between book and my composition.

“I was reflecting my own past, in which there was a period of occupying myself with plastic airplane models out of fascination with the technology (as I understood it). While reading “The Secret War” it occurred to me that electronic music has been very much linked with military technology, the latest of them being the computer. Many of our contemporary electronic tools are byproducts of military research and, unfortunately, application. Still a bit unsure about whether my early affection for military technology had different motivations, I saw a chance for sublimation in my musical work.

“A good deal of the book is about technologies used with airplanes. I read about airmen sitting in their planes over enemy territory, involved in surveillance or bombing tasks, and their particular sort of loneliness experienced during those flights (that particular feeling applies, perhaps even more so, to submarines). I tried to imagine what it must have felt like, and I kept that impression in mind when working on the tracks. Some passages in the music seem to contain sounds heard from a great distance, possibly reminiscent of a situation such as those described by Johnson.

“An interesting effect was observed during a presentation of Elapsed Time in Zürich, Switzerland, in July 1996 with twilight’s last gleamings just fading behind the high windows of the Shedhalle and all electric light inside the room turned off. The waning light and approaching darkness created the perfect accompaniment for the first track, with its very first section descending into near inaudibility. The music, with every notion of distance and remoteness, filled the large industrial space with a subtlety enhanced by the natural light condition.

“I had, and I still have, the strong need to analyse my older works. Since my style of composing has changed I found it interesting to see if I could compose a piece that would function as a link between my older and my more recent works. Thus Elapsed Time was conceived as a collection of older works rearranged in a retrospective process. Sequences of older compositions would be used while new combinations and alterations of parts of older works would be explored. For the original material, I made use of various tape machines, digital samplers and effects processors. Although since 1994 I’ve worked ever more frequently with computers for creating music, for Elapsed Time I limited myself only to such tools as I had used in the past. This was done in order to investigate how, after a period of several years in which my music and tools had changed, my now different structural and compositional criteria affected the reworking of older material. No computer-controlled manipulations were used to rework the older material into the current piece; only tape-based editing was used, in combination with analogue equalizers.

“Elapsed Time” was composed in spring 1996, in preparation for a concert tour in June and July of that year. I began by re-listening to a bunch of old tapes of field recordings and four-track tapes of old compositions. I made a list of the most interesting parts, noting possible alterations to be applied (such tape-typical ones as speeding up, slowing down and cueing). I also drew short structural sketches of the old compositions in order to lay open their prevalent block-like collage structure. In “Elapsed Time”, that kind of structure still shows through. There are two reasons for that. First, in many cases I simply took a certain extract from a composition and extended it, sometimes juxtaposing it with new overdubs, though leaving it intact as a block. Then, there is the tendency of tape music to result in collages with blocks along a timeline structured by cuts. I worked with only a two-track (i.e. stereo) DAT machine to compose the present work. In some parts, I used cueing and fast forwarding/rewinding to a large extent, structuring real-time passages by «playing» the two four-track machines running my old material. But generally, the tracks were assembled in a linear way, not using any insert cuts. This is structurally quite different from most of the work I have been doing since 1994 on computers, and bears more resemblance to how I started out with analogue tape in 1986. One could say that it results in a crossbreed of my older and my newer musical works.”

This edition of “Elapsed Time” remastered by Marc Behrens in 2014. Originally published as a CD in a numbered edition of 500 copies by Intransitive Recordings, USA. Originally released 01 March 2001.

Original sounds and sequences recorded between 1989 and 1995, recomposed by Marc Behrens in Spring 1996. Edited June 1996 by Marc Behrens and Atom™ at sel i/s/c. Language coaching by Howard Stelzer and Walter Hartmann.