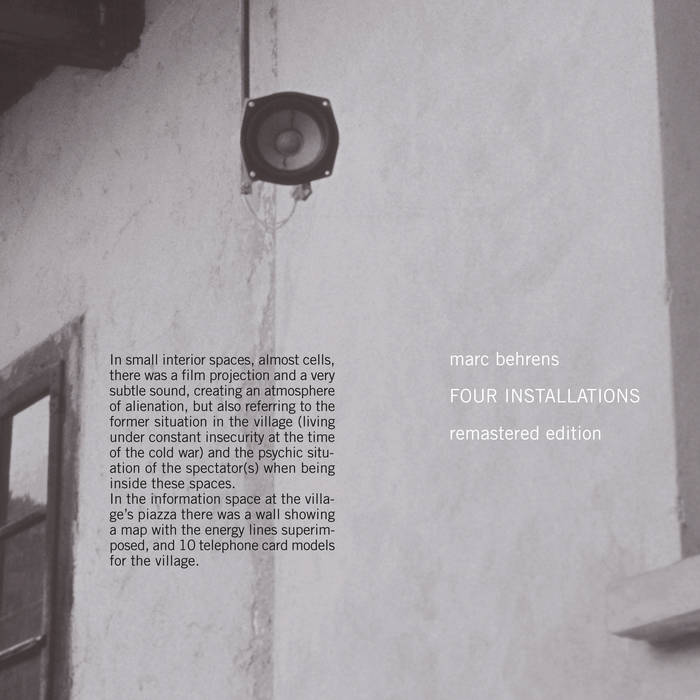 Shown in February 1999 at the ‘Institut für Neue Medien’, Frankfurt am Main, Germany. Computer programming by Karl Kliem at MESO Frankfurt. Fire recordings made in Amsterdam/NL 1996, Dublin/IR and Scrutto di San Leonardo/IT 1997, Cras di Drenchia/IT 1998–99.
Spectators had to cross a line of texts on transparent panels, reflecting some of those experiences, dreams, and ruminations which have influenced my working with sound, to get inside the installation, which then allowed for an interactive experience of the sound results of my occupation with fire. Floor mats with pressure sensors could be stepped on to trigger changes in volume and panning and to start new sound files, which played back on an 8-channel speaker system. The installation in the cellar of the building functioned also as a contemplation chamber.

The installation during the festival ‘Stazione di Topolò – Postaja Topolove’ in the italian village Topolò on the border to Slovenia consisted of several exterior and interior parts located along two energy lines in the village.
Two speakers emitting manipulated insect sounds from tape loops were attached to different houses. The sound was coming from above the spectators on the narrow paths in the village and melting into the surrounding noise of live insects.
In small interior spaces, almost cells, there was a film projection and a very subtle sound, creating an atmosphere of alienation, but also referring to the former situation in the village (living under constant insecurity at the time of the cold war) and the psychic situation of the spectator(s) when being inside these spaces.
In the information space at the village’s piazza there was a wall showing a map with the energy lines superimposed, and 10 telephone card models for the village.

The sound part of the installation ‘Environment’, which was exhibited at the apartment/gallery ‘rraum’, Frankfurt am Main, Germany, January–March 1998. Text material on ‘infiltration’, the underlying motif of the installation, was transformed into sound files. An arrangement of these sound files played back inside the bookshelf, the tape player was hidden in an excavated book.

Shown at the ‘Salon Vireal’ group exhibition at the ‘Institut für Neue Medien’, Frankfurt am Main, Germany, in November 1998.
The building’s predominant sound, the hum and hiss of computer equipment was transformed into a sound entity, which overlapped the space in at least four spatial dimensions. Quality: sounding space – potential: sound as entity, as self-sustained unit. TNE, which explored the tonal qualities of the sounds, was not used in the installation.