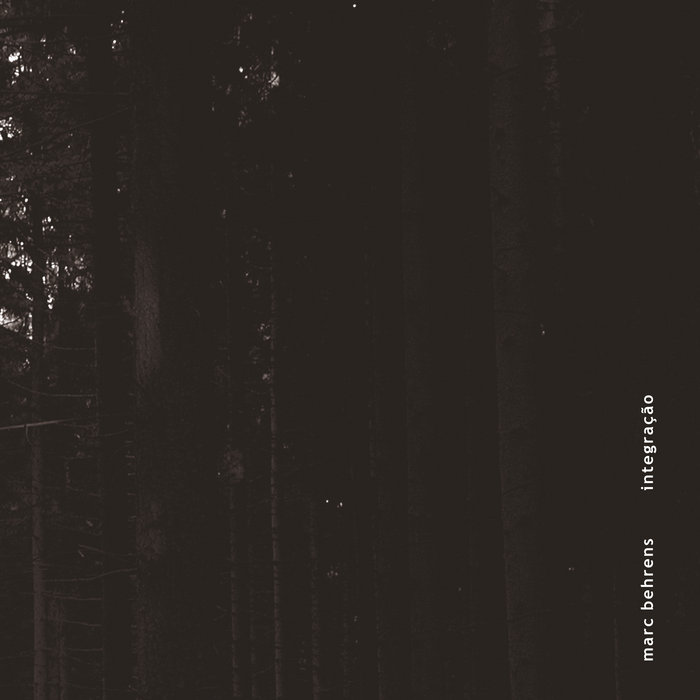 Integration
is a composition that I performed live in several versions. Usually the title integrated the language of the place where the piece was performed. In all the performances there was a basic repertoire of sounds consisting of a nucleus of tree recordings made in a mountain forest close to the Italian/Slovenian border in 1998, which in the performance arrangement became broadened with more recent material from 2000 (for example compilation work such as “Multiplication”, a re-interpretation of a composition by John Hudak) as well as different older material like “Elapsed Time” (released by Intransitive Recordings, USA, remastered edition at marcbehrens.bandcamp.com/album/elapsed-time-remastered-edition), and remixes I made in autumn/winter 2000 of older work dating from 1992 and 1993, some of the latter featured on the CD “Transition” (released by edition..., USA). The tree recordings were made by shaking the trees, thus the patterns of the sounds were generated partly by the plants, partly by human intervention, and arranged later according to coincidences and inherent keys in the material. Some of the performances were characterized by long silent pauses (up to two minutes).
Performance chronicle:
Integrazione Topolò – July 2000, Stazione di Topolò/Postaja Topolove, Topolò, Italy
Integracija Ljubljana – August 2000, Galerija S.O.U. Kapelica, Ljubljana, Slovenia
Integration Hamburg – Dezember 2000, B-Movie, Hamburg, Germany
Integració Barcelona – January 2001, Metrònom - Fundació Rafael Tous d’art contemporani, Barcelona, Spain (Catalonia)
Integració Alacant – January 2001, Museu Universitat d’Alacant, Alicante, Spain (Catalonia)
Integration London – March 2001, H291 Gallery, London, U.K.
Integrazione Roma – May 2001, Goethe-Institut Rom, Rome, Italy

Integração
now bears a title in Portuguese without location, because it was not performed. Nevertheless it sits as a studio version encoded on a CD originally released in Portugal. For this version I used the tree recordings along with a few field recordings of urban infrastructure, made during the preparation of the composition “Advanced Environmental Control” and later, preserving the original intention of the first performance: integration of a naturalistic and a technicized conception of sound.